Highlights of the parish

Creation of the Parish

The combining of the Parishes of Ombersley and Doverdale in 1973 created one of the largest parishes in Worcestershire. The Parish extends from Crossway Green in the north to Hawford in the south and from east to west from the River Salwarpe to the River Severn. There is excellent farmland with two-thirds approximately devoted to arable crops and one-third pasture for livestock. The soil is similar to that of the Vale of Evesham.

The village has a rich heritage of half-timbered houses built between 1450 and 1750, mostly within a short distance of the roundabout at the centre of the village. There is a magnificent old chestnut tree close to this same roundabout. The village is renowned for its high-class retail shops, restaurants and public houses. There is a hotel and several houses provide bed and breakfast. Holt Fleet is a popular riverside resort in summer.

St. Andrew's Church with its dominant spire was built in 1829 and replaced an earlier church built in 1269. It is an example of the work of the architect Thomas Rickman. The Old Chancel is a fragment of the early church and remains as the private chapel of the Sandys family. The late Lord and Lady Sandys lived at Ombersley Court. Sadly they have both now passed away but their legacy continues through the work of the Ombersley Conservation Trust and Parish Council.

Doverdale is a quiet rural community whose size of population has probably changed little since the time of the Domesday Book. The church, St. Mary the Virgin of Doverdale, is even older than St Andrews, being built in the eleventh century. In 1930, the churches of Doverdale and Ombersley became united under one incumbent.

Other buildings that feature in the lives of the community - the Ombersley Memorial Hall close to the village centre and Sytchampton Community Centre alongside the A449. There are two primary schools - Ombersley Endowed First School and Sytchampton First School. Strong social ties link the two villages through mutual support for activities organised by the Churches and voluntary societies. 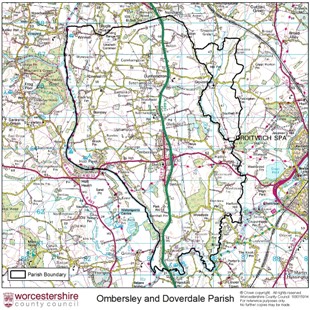 Click on the map to enlarge in a new window 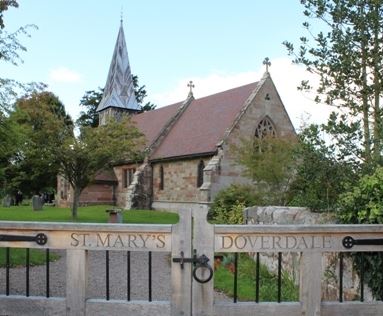